Home > Blog > Most common English grammar mistakes: are you doing it right?

Most common English grammar mistakes: are you doing it right?

Grammar mistakes can make a powerful message unbelievable. Seemingly similar words can have complete different meanings. That is why it is easy to make grammar mistakes. As a writer or self-publisher it is important to understand the grammar rules in order to deliver your message in a convincing way. In this blog post, you can read the most common English grammar mistakes and how to do it right. 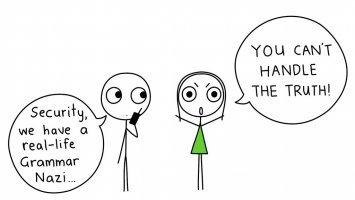 ‘’They’re’’, ‘’there’’ and ‘’their’’ are swapped very often, because they all sound practically the same. ‘’They’re’’ is the short version of ‘’they are’’, ‘’there’’ can be used to indicate a place or a situation and ‘’their’’ is a possessive pronoun. How to do it rightThey’re going to school.She is walking over there / There are five grammar mistakes in that article.Their cat is very cute.

The most simple way to explain the difference between farther and further is that you can use ‘’farther’’ for physical distance and ‘’further’’ for metaphorical or figurative distance.How to do it rightHe lives farther from the city than he did before.He made no further attempts to ask her on a date.

‘’To see’’ is an irregular verb. The conjugation is ‘’see’’, ‘’saw’’, ‘’seen’’. ‘’Saw’’ is the past tense and ‘’seen’’ is the past participle. Often, ‘’seen’’ is being used as past tense instead of a past participle. People who are saying: ‘’I seen that’’, are doing it wrong.How to do it rightI saw her walking down the street with her Nikes on.I have seen the movie already.

These words are spelled and pronounced similarly but they mean completely different things. ‘’Wheather’’ refers to atmospheric conditions and ‘’whether’’ introduces two alternatives.How to do it rightThe weather is supposed to be nice this weekend.Whether the weather is nice this weekend or not, I’m going to the beach.

This grammar mistake is similar to grammar mistake number one. ‘’It’s’’ is the short version of ‘’it is’’ and ‘’its’’ is a possessive pronoun.How to do it rightIt’s great to have you here!The cat was biting on its tail.

When using ‘’because’’, you are focusing on a reason, ‘’since’’ is more focused on the result. How to do it rightHe was angry at her because she opened the letter.Since she didn’t show up, he went home.

‘’Affect’’ and ‘’effect’’ are two different things. ‘’Affect’’ is a verb and means ‘’to influence’’. ‘’Effect’’ is used as a verb and a noun but is mostly used as a noun. As noun, it means ‘’a result’’.How to do it rightThe break-up affected my mood.One effect of the heartbreak was weight loss.

Another grammar mistake on the difference between a short version of a personal noun and a verb and a possessive pronoun: ‘’You’re’’ and ‘’Your’’. ‘’You’re’’ is a short version of ‘’you are’’ and ‘’your’’ is the possessive pronoun. It’s easy to make this mistake when you are typing fast.How to do it rightYou’re the best friend I have ever had.Isn’t she your best friend? Whether you create PDF’s with or without grammar mistakes, via Peecho you can turn them into professional books and magazines and sell them via print on demand. Just create a Peecho account and get started!